Singtel’s VIA, Asia’s first cross-border mobile payment alliance, has launched in Japan. This makes the ideal of payment with any mobile wallet being accepted on any payment platform closer to reality. 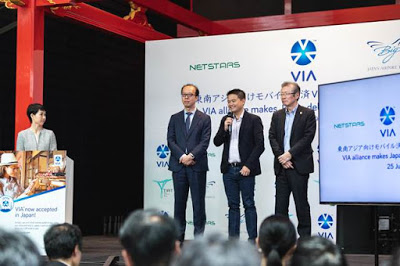 Japan has seen robust growth in tourist numbers from Southeast Asia in recent years, according to Singtel. There were over 3.3 million arrivals from Southeast Asia in 2018, an increase of 14%, with tourists from Thailand rising 15%, breaking 1 million for the first time*. With Southeast Asians leading a mobile-first lifestyle and QR codes being the dominant digital payment solution in the region, the launch of VIA will contribute to Japanese tourism and is expected to boost store sales.

Merchants with payment devices at Haneda Airport International Terminal, which are operated by Japan Airport Terminal Company, can now accept QR code payments from tourists on VIA, with more acceptance points across Japan due to be added in the coming year.

The VIA alliance is the first initiative of its kind to connect both telco and non-telco mobile wallets across borders to create a region-wide payment network that will enable consumers to use their local mobile wallets at participating merchants when travelling. The alliance, which currently counts Singtel’s Dash and AIS GLOBAL Pay among its member mobile wallets, enables tourists from Singapore and Thailand to shop and dine across Japan using QR code payments in their local currency at competitive exchange rates.

Following the launch at Haneda, VIA will expand into the rest of Tokyo and other popular tourist destinations such as Osaka, Kyoto and Hokkaido in Japan. Acceptance points will include convenience stores, restaurants and department stores.

Arthur Lang, CEO of Singtel’s International Group, said, “Japan is one of the most popular destinations for tourists from the region and we’re excited to be expanding VIA here. In Southeast Asia, digital payments are gaining widespread acceptance and fast replacing cash as the preferred transaction mode.

“This is a big step in further bridging the digital economies of Japan and Southeast Asia, facilitating travel for our customers and connecting Japanese merchants to more consumers. Our platform allows anyone with a mobile wallet on VIA to pay – in their home currency – at key merchants in Japan. We will be announcing more wallets joining the VIA alliance in the coming months.”

“The VIA alliance is the perfect partner for NETSTARS to open our merchants to a much larger consumer base, one that will continue to grow exponentially as the alliance expands.”

Takeshi Fujino, Executive Officer, Japan Airport Terminal Company, said, “As the gateway to Japan, we welcome this opportunity to collaborate with Singtel and NETSTARS to enhance the travel experience for our visitors from Southeast Asia and drive mobile payments. Together, we will bring convenience to users and merchants as we move towards a cashless society in Japan.”

The adoption of VIA comes ahead of the 2020 Tokyo Olympic and Paralympic Games, giving tourists the familiarity and convenience of paying with their local mobile wallets as they enjoy the games as well as well-known tourist attractions.

The VIA alliance was launched in October 2018 and is expanding to include Thailand’s Kasikornbank’s K Plus, Axiata Digital’s Boost Malaysia and Indonesia’s LinkAja. This will see the alliance grow to represent some 40 million mobile wallet users and 2.1 million merchants across Singapore, Thailand, Malaysia, Indonesia and Japan. The Singtel Group plans to expand the alliance to include its other regional associates as well as non-telcos.

In Japan, VIA acceptance is facilitated by StarPay, a multi-settlement gateway by NETSTARS that supports QR code payment. As StarPay is already deployed at merchants in Haneda Airport, VIA can be introduced and accepted smoothly without additional equipment or operational changes.